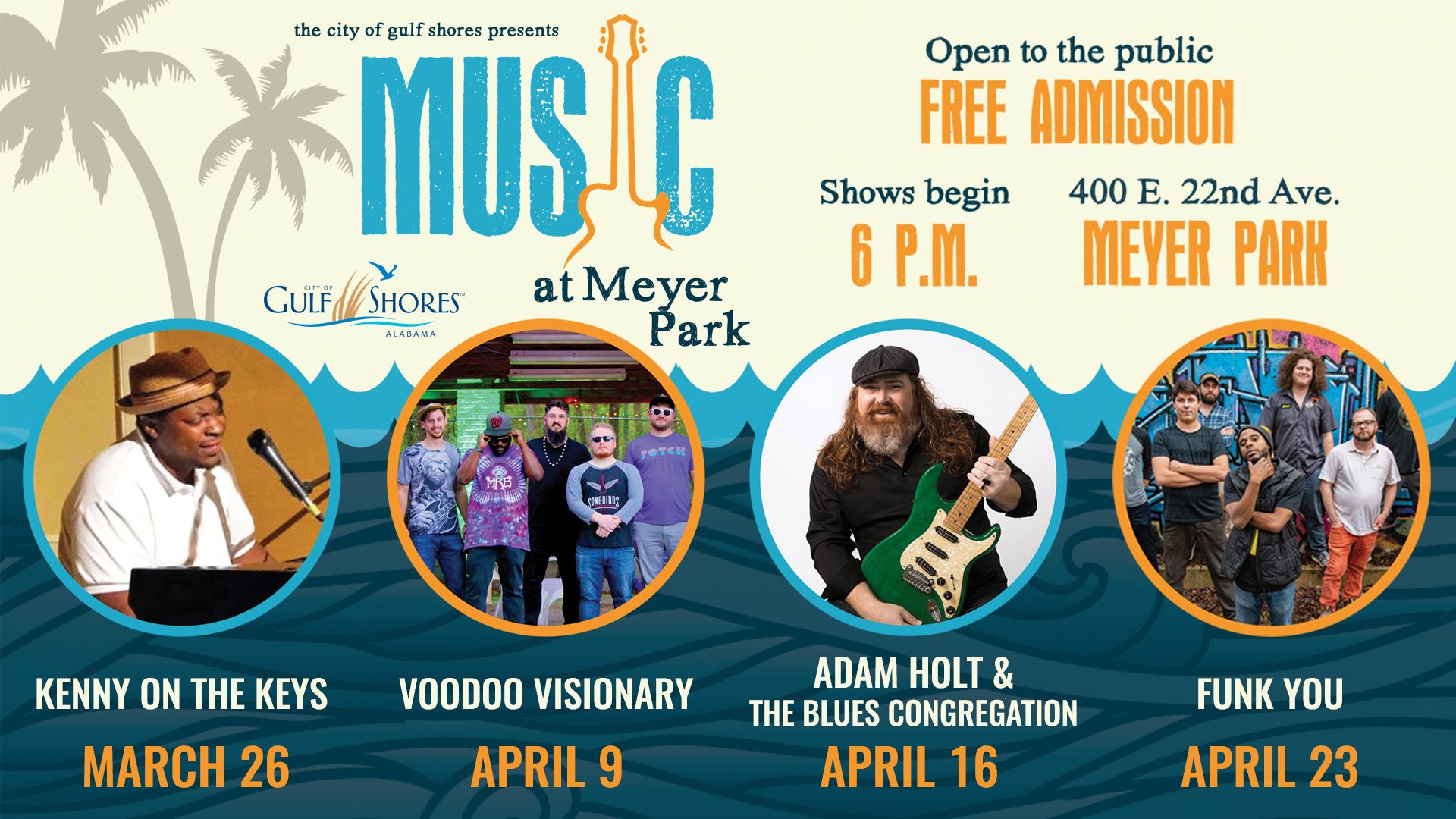 The City of Gulf Shores is excited to announce the 2020 lineup for the Music at Meyer Park concert series. These FREE springtime concerts have become a fan favorite for locals and visitors alike.

On March 26th, Kenny on the Keys kicks off the Music at Meyer Park series. When California funk meets Alabama soul, you get… Kenny Heard. Kenny Heard is a multi-instrumentalist who plays piano, guitar, drums, bass and mandolin. Also known as “Kenny on the Keys”, Kenny Heard performs both as a soloist and with his full band. Kenny plays all kinds of music from Funk, Blues and R&B to Rock, Country and Pop.

Voodoo Visionary steps in as the second performer for the Music at Meyer Park series on April 9th.

Hailing from the Dirty South musical mecca of Atlanta, GA, Voodoo Visionary’s improvisational funk dance music balances a tight, grooving rhythm section with soulful organ, funky clavinet, singing synthesizers, masterful guitar licks, and moving vocals to create a sound the group calls psychofunk. Influenced by a wide array of artists from Parliament Funkadelic and the Meters to the Grateful Dead and Allman Brothers Band to Miles Davis and Herbie Hancock, Voodoo Visionary has a uniquely blended sound that’s guaranteed to put the 'oogie in yo boogie.

Adam Holt & The Blues Congregation will take over the stage on April 16th. . After a 17-year absence and three original members lost, Adam Holt & The Blues Congregation have re-emerged to bring back their brand of authentic traditional blues to the gulf coast region. Before becoming a regular on the local music scene, musician and singer Adam Holt got his start playing blues in his early twenties with friends and mentors Henry Jolley and Paul Williams. Williams was the bass player of the original trio before the band expanded to a larger ensemble to include John Brock on harmonica and Bo Roberts on piano and B3. Holt separated from the band to venture out into other genres of music that included a variety of rock and roll, blues, classic country, and Americana. Since then, Williams, Brock, and Roberts have all passed on and now Adam Holt, playing guitar and harmonica, along with Henry Jolley on drums, have teamed up with bassist Jon Wells and guitarist Roger Fritz to bring the second coming of The Blues Congregation.’

Funk You will wrap up the 2020 Music at Meyer Park series on April 23rd. Hailing from the East Side Georgia town of Augusta, Funk You is an outgoing burst of energy that is continually climbing their way to the top of the music scene. This "funk" oriented outfit projects multiple musical styles focusing mainly on dance driven grooves with powerful clean vocals. Incorporating intriguing musical composition, tasteful lyrics, and crowd captivating live performances, Funk You is surely to make an imprint on your musical taste.

All Music at Meyer Park concerts are free and open to the public. Shows begin at 6 p.m. at Meyer Park, which is located at 400 E. 22nd Ave. These are rain or shine events. In the event of rain, the back-up location will be at the Big Beach Brewery.